Nothing short of a miracle;
leadership through turbulent times

From his humble beginnings as an engineer back in 1976, Dato’ Wong Wai Ching has grown from success to success in an illustrious career that has spanned five decades of construction in Malaysia. Most recently, he was called out of retirement, once again, to helm the MRT Putrajaya Line Project, successfully bringing works on Phase 1 of the project to completion. It is nothing short of a miracle when you consider that the world has been gripped by the COVID-19 pandemic over the past two years, bringing into perspective the magnitude of this achievement which is a testament to his steadfast leadership and guidance.

As Dato’ Wong is leaving the project after a job well done, the RISE team caught up with him to share his thoughts and experiences after steadily guiding the project undeterred through the unforeseen challenges the past two years have presented. 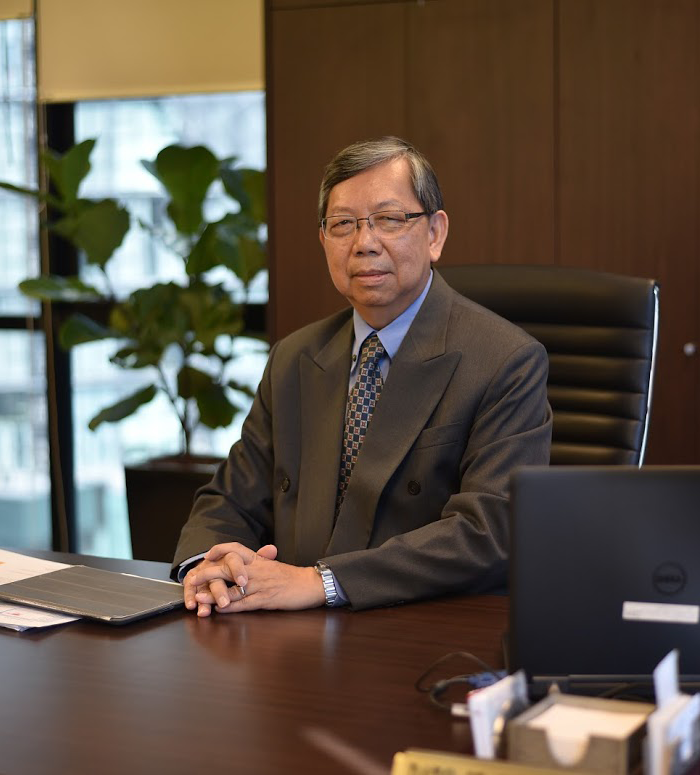 Dato’ Wong has exemplified great leadership skills throughout his journey at Gamuda.

When you were called to return to helm MMC Gamuda, what were your initial thoughts, concerns and goals?

To be frank, when I was first asked, I didn’t know if I was specifically needed or whether I was just needed to fill a vacancy. I also felt that others could lead, so why me? To make matters intricate, I was already fully retired with various other commitments which I would have to disengage from, so I declined the request when first approached. After further discussions with senior management, I was convinced that the call was for a reason and that I could make a meaningful contribution to the project, so I agreed to come on board. I knew I was in for a challenge though, thanks to my experience successfully delivering the MRT Kajang Line.

One of my biggest concerns then was the very vigorous cost-optimisation the project had just undergone at that time. The challenge was not only to manage the changes to internal workflows and processes but also deal with various external third parties especially the authorities who had not approved our amended development work order and building plans. It would be a lengthy process to obtain these approvals, and time was, unfortunately, not on our side.

With all this in mind, I had a singular goal coming into the project which was to deliver and make things happen while also cementing my legacy by successfully delivering two important Klang Valley MRT lines.

What were some of your major challenges during this period?

One of my major concerns was getting approval from the relevant authorities’ post-optimisation, and it ended up being quite a hurdle during my time as expected. The optimisations themselves were not well-received by the authorities as they felt we should reduce our bottom-line instead of thinning the project costs. Due to this, many optimisations were rolled-back and had to be reinstated at a cost to the project at the insistence of both the authorities and the project owner. Making matters worse, these were all only highlighted at the eleventh hour as work was about to be fully completed.

As you know, the Certificate for Completion and Compliance (CCC) is integral to everything from getting the railway scheme approved to being part of the contractual requirement for the handover process. Compared to MRT Kajang Line, obtaining approvals had become much more difficult as everything had changed, from the government to the civil service officers right down to the rules themselves. It was a lengthy process that took us more than one and a half years to push through, finally materialising now at the end of 2021.

Far and above, the biggest challenge to the project began only three months into the start of my tenure with the onset of the COVID-19 pandemic, which ground all human activity to a halt worldwide and saw the enactment of nationwide total lockdowns, here in Malaysia in March 2021. Extensive preparation as well countless presentations needed to be made to various authorities and the central technical departments within them to make a case for critical works to be allowed to continue. This, I would say was a gargantuan task, to be able to make a case for us, and we managed all the way.

This continued through multiple consecutive lockdowns of various severity, which we were forced to endure. Some may call it a miracle that we persevered; however, I believe this was only possible by the dedication and strong teamwork of those under me, who all the more than pulled their weight to keep us on track.

What sticks out the most in your mind when you look back over your tenure with the project?

Being over 70 years old, I have seen many things and experienced many changes during my working career. The world we live in itself has changed vastly over the years. I still remember a time when computers used to occupy a whole room, but you can now hold a laptop in your palm. No experience has come close to living through this pandemic which has affected so many people the world over and resulted in such a massive loss of lives and livelihood at every level of society.

I can share that there was a six-month period before vaccination programmes began, during which the number of cases was high. This incurred a massive cost to manage as we had to isolate and quarantine not only the positive cases but all the close contacts and persons under suspicion to keep the rest safe. Certain work packages had to shut down completely due to lack of available workforce, causing further delays. It seemed like an impossible task at the time, which is why many see the project’s success despite these odds as a miracle.

One of the things you had to do was make the highly uncomfortable decision of letting go of people from various departments incrementally. How did you manage this?

To be honest, a gradual demobilisation of our workforce was always to be expected as we completed various stages of works on the project. While some manpower demobilisation had to be deferred due to COVID-19, surprisingly our attrition rate due to resignation has been very high as I believe everyone working on the project knows that we will all be out of a job once the project is completed. There are a number of other projects around the country as well as internationally who have been poaching from our experienced and skilled workforce, which has also contributed to the exodus. 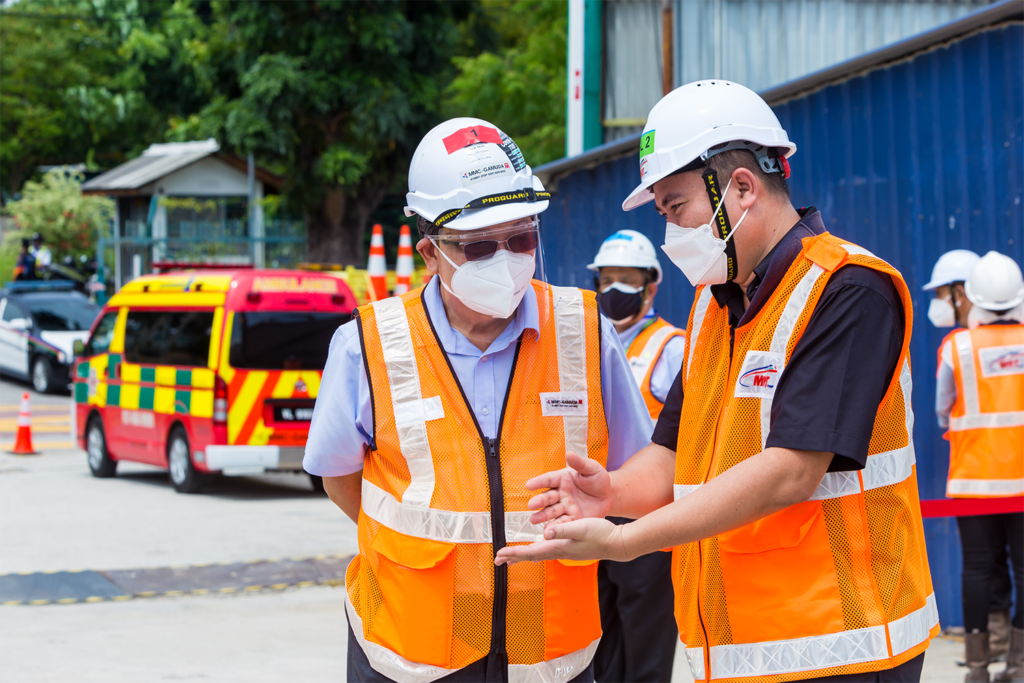 Some of us see you as being passionate about work, to the point that some may call you a workaholic. How would you respond to this comment?

I would say I’m a person who gives 110% and is really focused when I’m committed to something, so I find myself waking up in the middle of the night to check emails or reviewing documents to sign. Of course, this sometimes means I need to bother my employees on the weekend as well, but it’s only because there is work to be done, and we need everyone’s help to do it. Ultimately you need to manage your time efficiently and strictly. I avoid letting meetings overrun, and always prefer to get to the point during discussions. This frees up time for you to do more with the time that you have.

While I do walk and exercise regularly to keep fit, at the end of the day, the most important thing is to have an outlet or activity that helps you to de-stress. My days are spent meeting employees who come to me with their problems looking for a decision or a solution, so by 6-7pm every day, I am mentally exhausted. Personally, I follow the Japanese in this and like to have a glass or two of whiskey after a long day, even from my days back in the civil service.

Is this finally retirement for you? What are your plans, you must have a bucket list?

Yes, it’s time. I have just joined the 7-Series club, so I think it’s time for me to start to enjoy life a little bit more. I’m looking forward to maybe having a personal office equipped with Astro and fully stocked, where I start the day by reading my newspaper peacefully with a whiskey in hand. There are no problems to solve or important decisions to make, just rest and leisure. The rest, only time will tell. 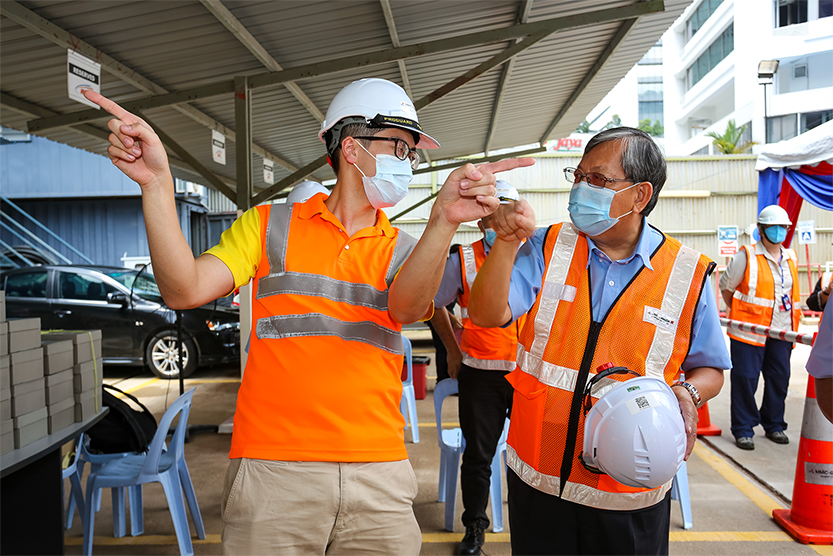 Dato’ Wong was always ready to share his experiences with others.

Do you have any final parting words for the project employees?

Decision-making and problem-solving are key to leadership. As humans, don’t be afraid of making wrong decisions or making mistakes, as long as you learn from them and do not repeat the same. Engineers are trained as problem-solvers, so don’t just refer to a manual or book. A technician only knows how to refer to a book, but an engineer is required to think outside the manual to find workable solutions and make decisions.

What has been the single guiding principle in your life which has seen you successfully completing every leg of your work-life journey through the decades?

Don’t give up when you pursue something, be persistent, and go after it wholeheartedly. I am a person with dogged focus, regardless of whether it is a minor issue or a big important matter, I go all the way to see it through to the end. I have practised this from the start of my career, and I would say it has served me well. Most importantly, I always keep myself grounded and try to be humble as I believe what goes around, comes around. At the end of the day, we are all just contractors working in the same industry, so deal with and treat each other with respect. I have been right at the top of the spectrum when I was in the civil service, and now as a contractor, we are right at the bottom rung, modesty and humility win every bit of the way.